From New York to Nebraska 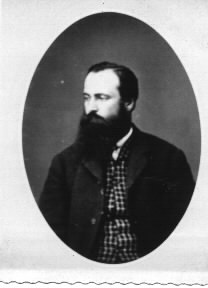 James Ferguson was born in Andes, New York.  He was raised on the farm that his father John D Ferguson homesteaded along with his father David Ferguson. He had many siblings from John D ‘s first and second marriage. His mother is of the second marriage Delilah. He went to the local one room public schools of the time along with his siblings and neighboring farm children.

While he lived in Andes he was a photographer in the early day. His occupation in a census of 1865 is listed as a photographer. Some of these pictures of siblings and family believed to be of his work.  He also is said to have been a drummer. Family members have said he had double teeth that could crack a walnut, and he wore a beard to cover his cheeks from protruding out due to his teeth.

About 1877 James moved his family to Gering Nebraska, what was then Cheyenne County in the Panhandle of Nebraska. He was among the first settlers in area by homesteading 160 acres of land, and putting a sod home on the property. He likely traveled the Oregon Trail from Iowa. Past family members say he traveled in a wagon and a pair of mules. He came with his son Willie from Kenasaw, Adams County Nebraska that is west of Hastings 1886 first before moving the rest of the family.

Notes from Steve Hall state that James Ferguson was called the “Potato King”. He raised early Ohio potatoes. He also had seed corn. He may have been the first farmer to irrigate in the Scottsbluff Gering valley. 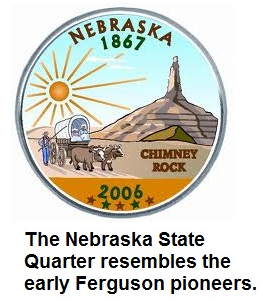 When you see the Nebraska State quarter of 2006, then you could see the resemblance of James Ferguson and his family nearby Chimney Rock near Bayard Nebraska. Chimney Rock is only 20 miles from his homesteaded land in Gering, Nebraska.

James married Isabella Gertrude Anthony on 12 Jan 1859. She was from another local town called Boniva near Andes, NY in Delaware County. Together they had 7 children. 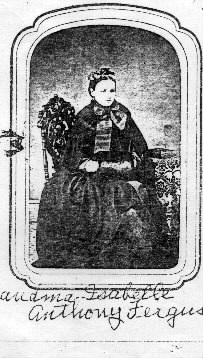 Together they left Andes, New York about 1770 and moved to Iowa first with their first three children; Charles, Fannie, and William. Along with them were his father John D and mother Delilah and his grown siblings of Delilah children. While they were in Clarence, Iowa, they had four more children; Mary, James, Courtland, and Minnie.

Although photography is listed in an 1865 census as James’ occupation, they probably were enticed to move west by Homestead Acts such as the poster shown below. 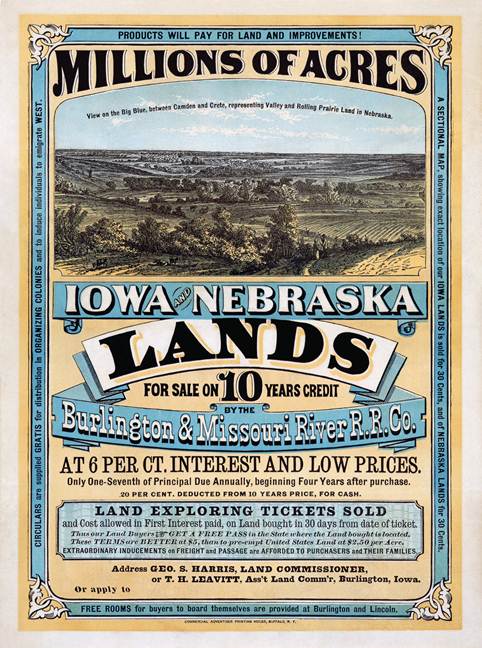 In the Federal census of 1870, James Ferguson along with his young family and including father, mother, brother, sisters were living in Clarence Iowa. Their real estate was valued at 5600 and the personal estate was 1600.  John D, the father, looks to be the head of the household here. 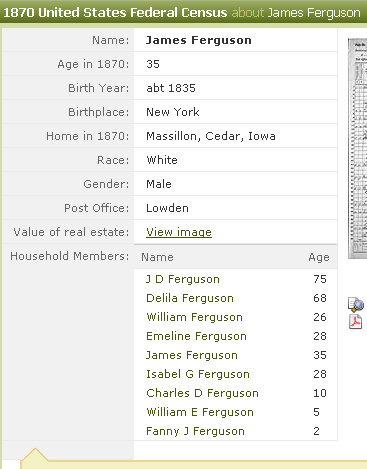 The Home in Nebraska

The first home that James built was a sod home and a temporary home until he could manage to get a framed wood house built. He took advantage of the Homestead Act which allowed him to have 160 acres of land. 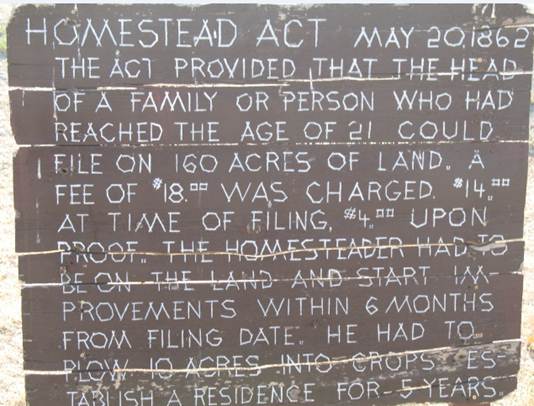 Here is a picture of what a sod home looked like. This is not known to be of James Ferguson place but probably quite similar. This sod home picture was taken 1901 on the prairie. The sod home was on the northwest side of his property. 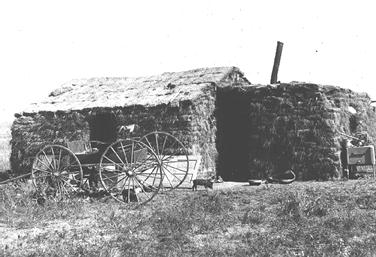 Here is a picture of the James Ferguson farm and home he once had. Date unknown but likely about 1910. The directions were south on 7th street from Gering to Nursery Road and then turn east ½ mile on south side of road in NW corner of ¼ section. The sod house was east of the bridge Ostenburg Drain Ditch. 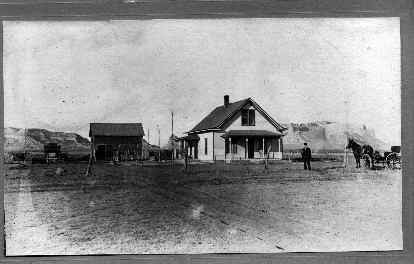 A Biography in Western Nebraska History

James Ferguson, along with his son is highlighted in HISTORY OF WESTERN NEBRASKA & IT'S PEOPLE, VOLUME III.  This is its contents.

James died on Nov 23, 1912 and Isabella died on Sept 7,1907. Both are buried in the West Lawn Cemetery in Gering Nebraska. The two pictures are the last known pictures taken. 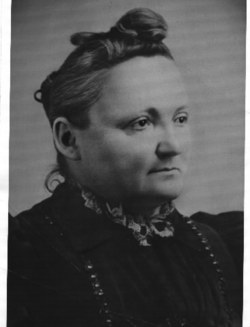 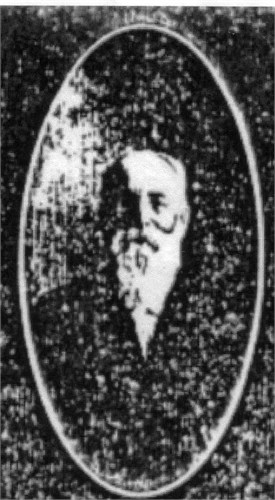 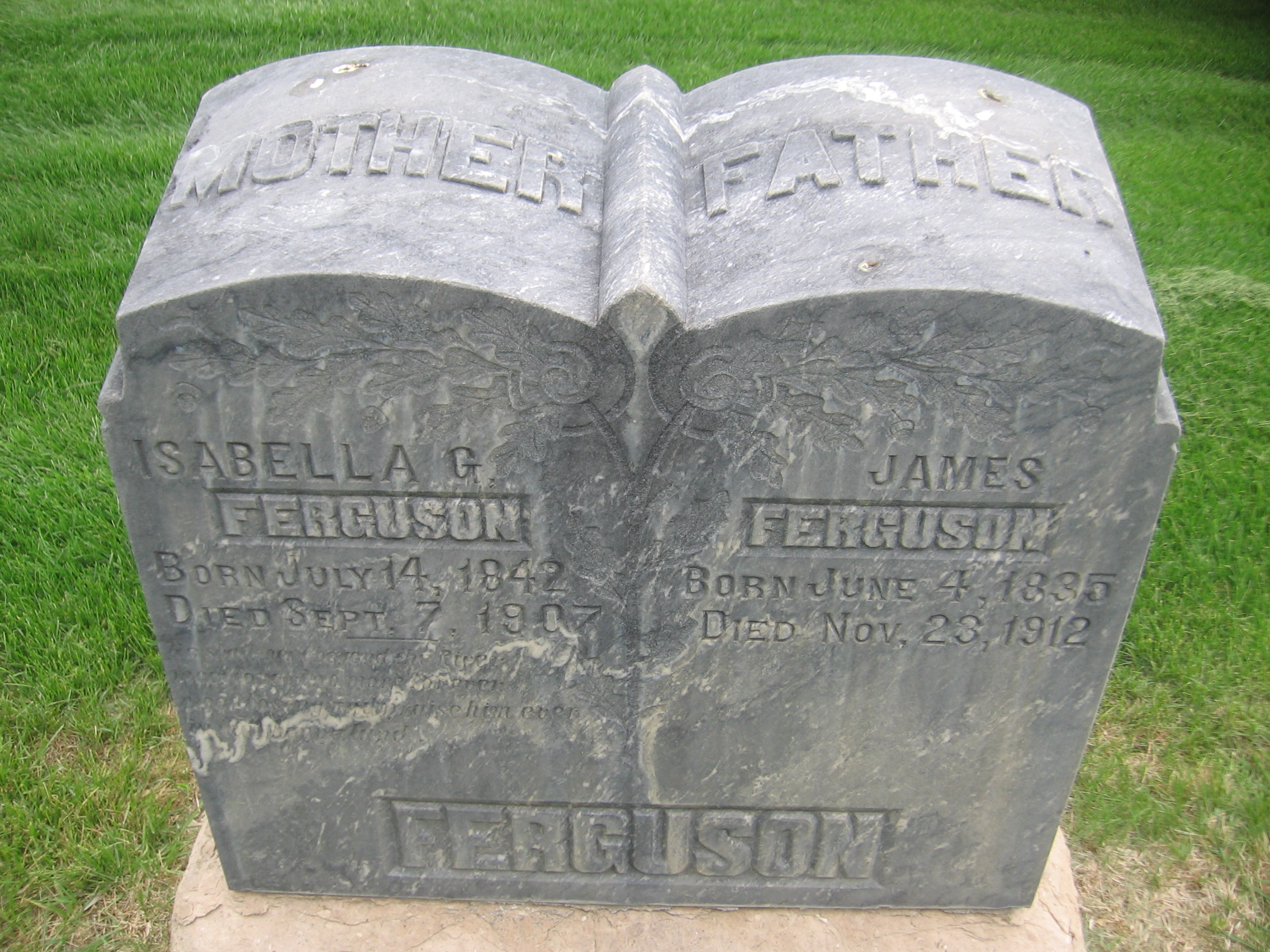